Lainey Feingold is a disability rights lawyer focusing on digital access, an international speaker, and the author of Structured Negotiation, A Winning Alternative to Lawsuits. Lainey’s book is packed with win-win stories of accessibility advocacy with some of the largest organizations in the U.S., all without lawsuits.

In 2017 Lainey was named one of the 13 Legal Rebels by the ABA Journal, the national magazine of the American Bar Association. That year she was also named the individual recipient of the John W. Cooley Lawyer as Problem Solver award, given annually by the Dispute Resolution Section of the ABA.

Lainey has twice been recognized with a California Lawyer Attorney of the Year (CLAY) award (2000 and 2014) for her digital accessibility and Structured Negotiation legal work.

Is this one on?

Yeah, that one's on.

Wonderful. I just want to make sure they recorded that information. Good morning everyone, I'm Norman Robinson. I'm fortunate enough to be the Co-Chair, which means that Chris does all the work and I get credit for riding along with all the other wonderful people that have helped contribute to making this thing happen. Chris did mention earlier about the proceedings. I just want to point out one thing that I'm most proud about, and that is the proceedings are an avenue for people to be published. So if there's something about accessibility that you want to get out there, and in a forum like this, it's important to provide a venue for that, and we do that. And I'm looking for any opportunities to make sure that the proceedings are available to everyone, as many people as possible, everywhere. I say that as being an IEEE member, and having to pay many hundreds of dollars for papers about accessibility and technology that is related to our field that are hidden by paywalls. And I just want to say personally, I understand the professional need to do that, you've got to have money to put this all together, but I'm most proud of the work that Chris has, and everyone has done in making sure these proceedings are available so that we can share our knowledge with everyone. With that said, I want to mention that with my grandfather being a preacher, and my mother being a preacher, I am not a quiet person. So, and with a large family, if you need anything, I was listening in a few conversations with people coming in, I'm not really that shocked. So if you are, if you need help with anything, please, as Co-Chair, my job is to fill any need. So if you guys have any need, personal, whatever, while you're at the conference, please reach out to me, I'm glad to help. With that said, I think Chris--

Yes, oh. Thank you very much, Norm. So, thank you Norm, and yeah, Norm has been a great help and great supporter, even though he doesn't get to do all the tasks, 'cause he's actually pretty busy with his regular job. So, thanks Norm, and thanks to all the committee. If you're on the committee, could you just wave right now? We have quite a lot of our committee members here. The committee members have a blue ribbon. We're always looking for feedback, and this is the best place to give the feedback, so chitchat with the committee members, go up and talk to the committee members and tell them what you think, what your questions are. The yellow ribbons are the sponsors, please be sure to go up and find our sponsors and shake their hands. Thank you very much for helping out. I want to introduce Lainey Feingold. Lainey Feingold I've known for quite a while now. I've been in the accessibility field for 26, 27 years now and I think I've known you since the late 90s. I think that one of the first times that we actually met was when ATMs were on the legal block, as it were. The first accessible ATMs came in around about 2000, 2001, if I'm not mistaken. That was 10 years after the law said that they should be accessible. So it took until, finally, legal action caused that change. So when you see headphone jacks on ATMs, yes, it was in the ADA in 1992, it took 10 years. And I think about the comparison with websites. Here we are, it's at the time, it's 2018. We are 20 years past when WCAG 1.0 came out. We've had plenty of time, we've had a long time since section 508 came out, and we still get the occasional survey of government websites that pretty consistently comes up with the same result, things are not accessible. So there has been a proliferation of lawsuits, and lawsuits and laws only happen when people are not doing what you want them to do as a society. Lawsuits are typically the last resort. So it's the big topic of conversation right now. It is growing at many hundreds of percent per year it seems, the number of lawsuits that are coming out. So we decided we would invite Lainey Feingold to come talk to us about testing and legal.

You got plenty of time.

Okay, good. I got plenty to say too. Okay, so-- This isn't a big legal update, but I am a lawyer invited to a testing symposium, so I want to give you both a big picture, which I personally find motivating to think about the civil rights and to tie it into civil rights history and think of the dreamcatcher, but also a little bit of the details. So US laws and policies, very strong on accessibility, there's a very strong foundation. The Americans with Disabilities Act covers the public sector, the private sector, higher ed, employment. Federally-funded activities are covered, which means that federally-funded technology has to be accessible. Federal employment, sections 501 and 503, federal procurement, which is section 508, which so many of you are familiar with. There's a special law for airlines to be accessible. And there's still the Affordable Care Act, section 1557, requiring healthcare, #HealthIT, to be accessible. So we have an extremely strong foundation in the US, and don't be intimidated by someone who says, "Oh, it's a great area, we don't really know what to do." No, we know what to do because all these laws are basically civil rights laws. They're basically laws that say, "You know what? "We're gonna have a country where "if we spend federal dollars, "we're not gonna exclude disabled people "from the benefits of that spending. "If we have a program that the public's invited to, "the whole public has to be invited to it." So the law foundation is very strong. Do we have web regulations? We do not. We do not have any specific regulations under the Americans with Disabilities Act that specifically say you have to meet WCAG, you have to make your websites, you have to make your mobile apps accessible. We do have 508, and that's for procurement. Again, we have 504 for federal spending. Those of you in government and higher ed are impacted by those laws, but we don't have ADA regulations. Have any of you ever been told by anyone in your organization, "Well, there's no regulations, we don't know what to do"? Yes, many nods, so people do know what to do, include and participate, include and participate, and the only way to do that is to design to standards, and we're gonna talk about that in a minute, and have web accessibility standards. So I have a couple of things I say about that. ADA web regulations are inactive, but the ADA is not. And there's a whole history of why we don't have regulations which we don't have time for here, but it's safe to say we're not gonna have regulations for a while, and we don't want regulations under the current administration. So even though I know inside your organizations, it would be so good to say, "Well, here's the regulation, here's the page, "here's the section, do it", in fact, in this political climate, we do not want this Department of Justice issuing any regulations because they won't be regulations that support accessibility in the broad way that everyone in this room wants them to be. So ADA web regs are inactive, but the ADA isn't, and web regs are dead, but the ADA is alive and well. So, those are my sort of shorthand things for that, which is why I put the little Twitter bird. And I used to say those, and you can go back on my website for many years because we started trying to have regulations in 2010, and I always said these things, they didn't matter 'cause the ADA is strong, but now, we have so many lawsuits, we're starting to have judges agree with it, and here's just one example. There was a case against 1-800 Flowers about their website and the judge said the DOJ, Department of Justice's rulemaking process has no impact on the fitness of this case for adjudication, which is a fancy way of saying just because there were no regs, this case can still stay in court, and we're still gonna be able to proceed under the ADA. Even the current Department of Justice agrees that the fact that there are no regulations does not mean the ADA does not cover websites. So the, is anyone here in the credit union world? Well, so the credit union world is an area of great frustration to be right now because the very first talking ATM in the entire United States was from the San Francisco Federal Credit Union in San Francisco City Hall. And recently, the credit union in Washington State, I think it might be called Boeing, I'm not exactly sure, did a wonderful web accessibility agreement with the National Federation of the Blind. Is it called Boeing?

I think it was Boeing.

Thank you, Lainey. Thank you.

That was on two hours' sleep.

The Q and A session is actually the lunch session, so the Q and A for this is lunch with the keynote, that will be happening later. So would you believe me if I said that we thought about cookies, but with all the talk about swim lanes, we were worried that the cookies would get soggy? We don't have cookies, sorry. We do have snacks though, but next time that I have Lainey speak, I'm gonna do cookies.

Lainey: I should have given you a heads-up.

We do have some snacks and all the coffee and teas and everything will be in the multi-purpose room. We would like you back here for 11, so, 'cause it's a half hour break. If you didn't get to sign the book for Jon, we will, I think leave it at the, put the book at the registration table. If you haven't had a chance to sign it, please do so. And we'll see you back here in half an hour, thanks. 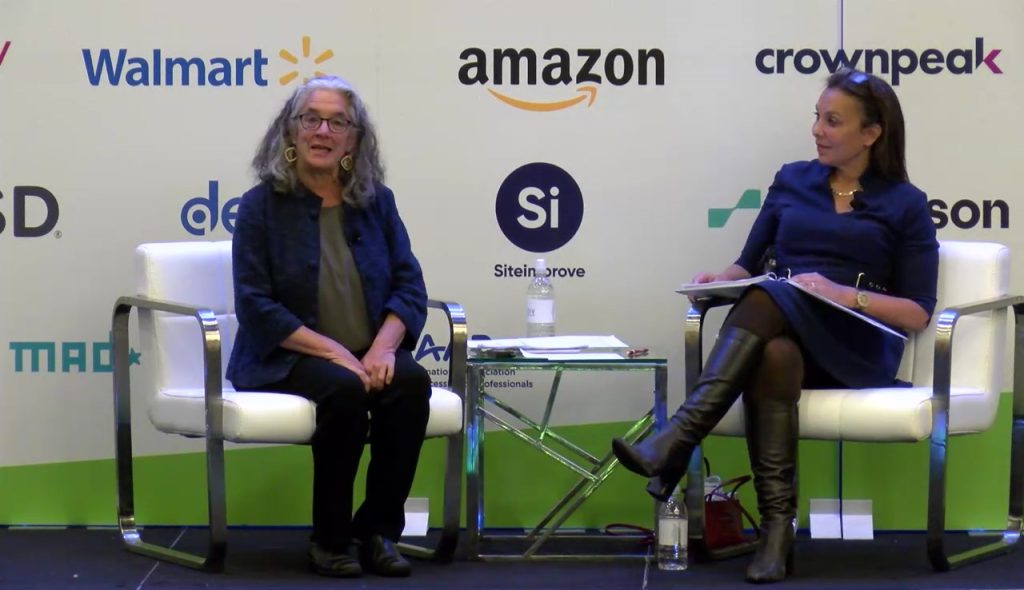 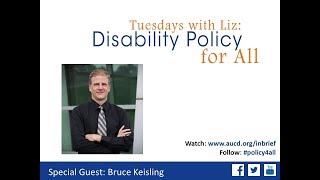 Tuesdays With Liz: Bruce Keisling Tells All About the AUCD Conference! 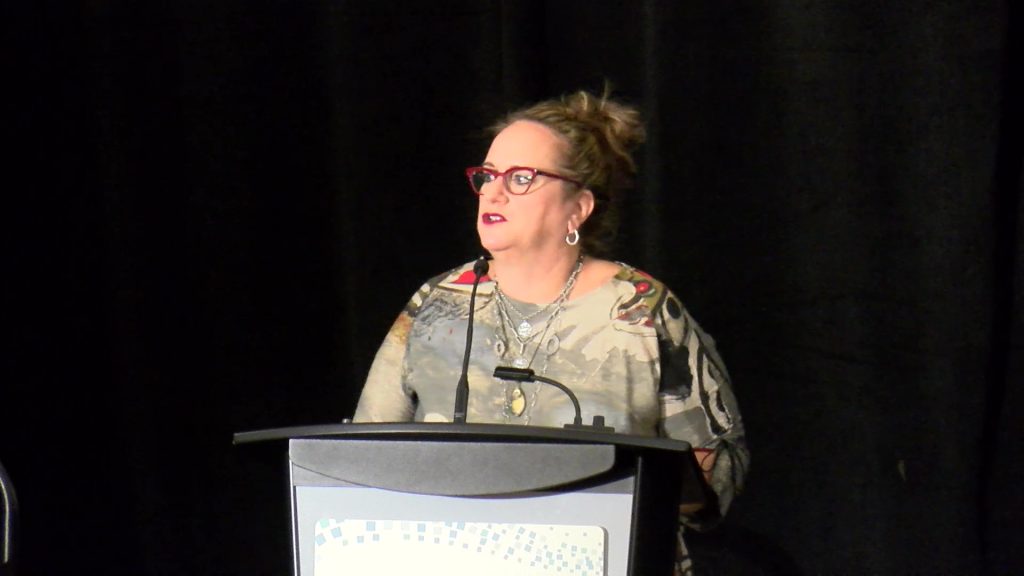